Wilhelmina Barns-Graham, known as Willie, was born in St Andrews, Fife, on 8th June 1912. Determining while at school that she wanted to be an artist she set her sights on Edinburgh College of Art where she enrolled in 1932 and graduated with her diploma in 1937.

At the suggestion of the College’s principal, Hubert Wellington, she moved to St Ives in 1940. Early on she met Borlase Smart, Alfred Wallis and Bernard Leach, as well as Ben Nicholson, Barbara Hepworth and Naum Gabo who were living locally at Carbis Bay. She became a member of the Newlyn Society of Artists and St Ives Society of Artists but was to leave the latter in 1949 when she became one of the founding members of the breakaway Penwith Society of Artists. She was an early exhibitor of the significant Crypt Group. Her peers in St Ives include, among others, Patrick Heron, Terry Frost, Roger Hilton, and John Wells.

Barns-Graham’s history is bound up with St Ives where she lived throughout her life, and it is the place where she experienced her first great successes as an artist. Following her travels to the Grindelwald Glacier, Switzerland, in 1949 she embarked on a series of paintings and drawings which caught the attention of some of the most significant critics and curators of the day. In 1951 she won the Painting Prize in the Penwith Society of Arts in Cornwall Festival of Britain Exhibition and went on to have her first London solo exhibition at the Redfern Gallery in 1952. She was included in many of the important exhibitions on pioneering British abstract art that took place in the 1950s.

In 1960 Barns-Graham inherited Balmungo House which initiated a new phase in her life. From this moment she divided her time between the two coastal communities, establishing herself as much as a Scottish artist as a St Ives one. Balmungo House was to become the heart of her professional life.

Barns-Graham exhibited consistently throughout her career, in private and public galleries. Though not short of exposure throughout the 1960s and 1970s, her next greatest successes did not come until the 1990s. Important exhibitions of her work at the Tate St Ives in 1999/2000 and 2005 and the publication of the first monograph on her life and work, Lynne Green’s W. Barns-Graham: a studio life, 2001 (new extended edition, 2012), confirmed her as one of the key contributors of the St Ives School, and as a significant British modernist. 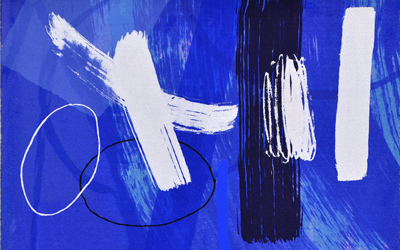