Sir Eduardo Paolozzi (1924-2005) was one of the UK’s most significant artists/sculptors of the C20and is widely considered to be one of the pioneers of pop art. Born in Leith, in north Edinburgh, he studied at the Edinburgh College of Art in 1943, briefly at Saint Martin’s School of Art in 1944, and then at the Slade School of Fine Art at University College London from 1944 to 1947, after which he worked in Paris. While in Paris from 1947 to 1949, Paolozzi became acquainted with Alberto Giacometti, Jean Arp, Constantin Brancusi, Georges Braque and Fernand Léger. This period became an important influence for his later work. For example, the influence of Giacometti and many of the original Surrealists he met in Paris can be felt in the group of lost-wax sculptures made by Paolozzi in the mid-1950s. Their surfaces, studded with found objects and machine parts, were to gain him recognition.

This group of prints is from General Dynamic Fun. 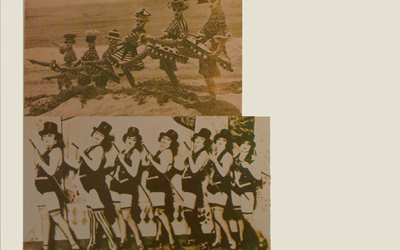