Samuel Ireland (21 May 1744 – July 1800) was a British author and engraver. He began life as a weaver in Spitalfields, London, but soon took to dealing in prints and drawings and devoted his leisure to teaching himself drawing, etching, and engraving. He made sufficient progress to obtain a medal from the Society of Arts in 1760. In 1784 he appears as an exhibitor for the first and apparently only time at the Royal Academy, sending a view of Oxford. Between 1780 and 1785 he etched many plates after John Hamilton Mortimer and Hogarth. Etched portraits by him are in the print room of the British Museum, together with etchings after Ruisdael (1786) and Teniers (1787) and other masters, and some architectural drawings in watercolour.

Ireland was an avid collector of books, pictures, and curiosities, gradually becoming an all-absorbing passion. In 1794 Ireland proved the value of a part of his collection by issuing “Graphic Illustrations of Hogarth, from Pictures, Drawings, and Scarce Prints in the Author’s possession.” Some of the plates were etched by himself. A second volume appeared in 1799. The work is of high interest, although it is possible that Ireland has assigned to Hogarth some drawings by other artists.

Cliefden Springs is from Picturesque Views on the River Thames. 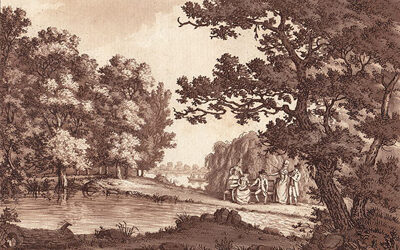