Jack Milroy was born in Glasgow in 1938. He trained at the Scarborough School of Art and the University of London, and has been based in London, where he has taught and worked ever since. Over a forty year period he has exhibited throughout the UK and briefly in the USA and since 1996 he has been represented by Art First.

Milroy works with diverse materials; alongside illustrated books, he has used old tubes of paint, paint brushes, stamps, maps, a rat, a hot water bottle, and now, with astonishing skill, his computer and a sophisticated Epson printer to make archival inkjet prints. Together they allow him virtuosic manipulations of imagery, either found or created photographically, which he then subjects to a surgical use of the scalpel, creating the cut paper and cut film constructions seen in recent work.

Whilst there is a playful side which answers to an irrepressible sense of humour, with a surrealist interest in the art of transformation, sabotage and chance, there is also a serious formal investigation at work, and a darker preoccupation which underpins much of Milroy’s oeuvre.

Into the Dark Wood 2002, was the start of a fruitful and continuing collaboration with Dame Antonia Byatt. Arising from a discussion about making a work for Goodwood Sculpture Park, Milroy’s original idea had been to make an image of an English wood as a poem in words, extending from beneath the earth, upwards to the trees and skies. Letters, carved and arranged in a cube were to become a large sculpture, whereas the editioned work took the form of blocks of specifically coloured words laid out horizontally as a beautiful archival inkjet print signed jointly by Byatt and Milroy. 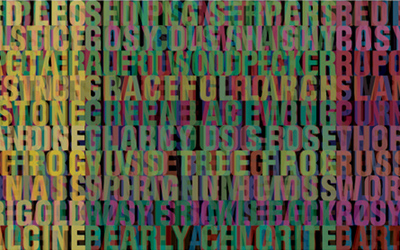