Ian Welsh (1944-2014) began painting early in life, though there was more music than visual art in his background, and his determination to go to art school came as something of a surprise to his parents. His early training at Regent Street Polytechnic, under such teachers as Dennis Creffield, Norman Blamey and Leon Kossoff, stood him in good stead for Chelsea School of Art, where he was taught by Patrick Caulfield and John Hoyland among others. Welsh moved from painting into sculpture, under the inspired tuition of George Fullard, left college and began to make his way as an artist and teacher. He was always prepared to take on other work to make ends meet, whether customised car spraying or pig farming, house renovation or estate agency, but he had a special vocation for teaching. He taught painting at Harlow Technical College and Norwich School of Art, and ran his own independent art school in Suffolk, latterly taking up the job as head of painting at the Vestlandets Kunstakademi in Bergen, Norway (1989–91). He had a supremely holistic attitude to life and saw all his varied activities as part of the same broad artistic path, with art defined as the creative solving of problems.

From sculpture he moved back to painting and printmaking, inventing his own methods of using new materials such as synthetic acrylic lacquer. His lacquer paintings of transparency and reflection, specifically of ice and water, led to another development of technique in which he drew with air, using the compressor of his spray gun to move the paint around on the board. Paintings of Cornish and Mediterranean subjects (light on shallow water at sunset) led to a reinvestigation of Norwegian themes, and particularly of the meltwater from the Hardanger glacier, at the head of the Hardanger fjord. A series of dramatic vertical black-and-white panels of meltwater were the direct predecessors of the ‘Gravity’s Rainbow’ series, in which Welsh harnessed the forces of gravity to make richly seamed abstract paintings of great and poignant beauty.

Welsh described the genesis of the Meltwater series: ‘If one is lucky enough to stand at the foot of the ice cliff which is the permutation of the Hardanger glacier, the world suddenly changes from iridescent blues and greens to mysterious blacks, flickering with pure white light, indicating the liquid thrust which has been the water trapped for thousands of years.’ Light is the key to these late works, the affirmation and optimism of light, which glows from the potent and unusual colour combinations of the ‘Gravity’s Rainbow’ paintings. These apparently abstract paintings are all about direct experience of the real world, and trying to find a painterly equivalent for the personal nature of those discoveries. 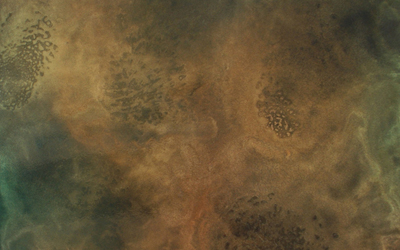