Ian McLean (1973-2000) was one of the up and coming artists redefining figurative painting in the 1990s. His figures are striking and straight forward, the paintings sparse but not empty. This fine and very direct portrait I acquired from the exhibition ‘Little Angels’ at Pippy Houldsworth Gallery, London featuring Glenn Brown, Christopher Bucklow, Mat Collishaw, Rineke Dijkstra, Laura Ford and others. At the time, 2003, this style of painting was considered new and expressive.

He spent some years painting just two persons, his girlfriend and another woman. The style of the paintings has been described as “post brit-pop” due to the remarkable superficiality and the typical British style of the models he paints. “My paintings are somebody, not just anybody”, the artist stated.

His paintings quickly entered public collections including The New Art Gallery Walsall, Ulster Museum and Arts Council Collection, whose paintings can be seen on the ArtUk web site.

‘Girl 8’ is a wonderfully tender portrait of, I believe, his wife. I love its subtle tones and simplicity as well as its directness due to the way in which he has cropped the face. 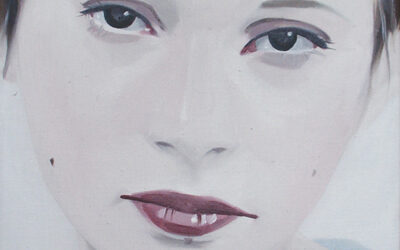