Fiona Robinson, artist, curator, writer, is currently President of the Royal West of England Academy. She lives in Dorset.

Robinson primarily uses graphite, combined with other media, on prepared support. Although her current work is made in direct response to music, ‘View of the Ferry from Doonferry’ is contemporaneous with a period she spent in Ireland after receiving the Ballinglen Arts Foundation Fellowship in 2010. It is rare for her work to be so directly landscape-looking as her focus is, more usually, a conceptual, abstract vision/interpretation of place. The title of the Irish series,‘Ballinglen Paintings – Unstable Horizons,’ provides an indication of this.

Her work is held in major public collections including The British Museum London, The Fitzwilliam Museum Cambridge, The Swindon Museum and Art Gallery, The Polish Art Foundation Melbourne Australia and The Ballinglen Museum of Contemporary Art Co. Mayo, as well as private collections worldwide.

She was elected an Academician of the Royal West of England Academy in 2013 and is a Fellow of the Ballinglen Arts Foundation Co. Mayo. 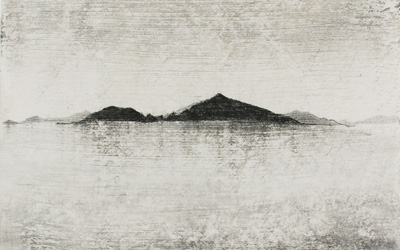 Fiona Robinson – View of the Ferry from Doonferry