Adriaen van de Velde (bapt. 30 November 1636, in Amsterdam – bur. 21 January 1672, in Amsterdam), was a Dutch painter, draughtsman and print artist. His favourite subjects were landscapes with animals and genre scenes. He also painted beaches, dunes, forests, winter scenes, portraits in landscapes, as well as mythological and biblical scenes. He belongs to a group of painters referred to as the Dutch Italianate painters, who combined Dutch agricultural landscapes with mythological or Arcadian scenes in Italian settings. His paintings are characterised by their delicate, careful composition and his mastery of lighting effects as well as the human figure.

Adriaen was born in Amsterdam where he was baptised in the Oude Kerk on 30 November 1636. He was the son of the marine painter Willem van de Velde the Elder and Judith Adriaens van Leeuwen. His brother Willem van de Velde the Younger was also a marine painter. He initially studied with his father. Not wishing to follow in the family tradition of marine painting, he decided to move to Haarlem to continue his study in the workshop of Jan Wynants, a landscape painter. In Haarlem he also met Philip Wouwerman and Paulus Potter, both animal painters who had an important influence on his work.

From 1657 he worked in Amsterdam where he married on 5 April 1657 Maria Pieters Oudekerck (or Ouderkerk), a Catholic. He converted to Catholicism even though its adherents suffered persecution and could only practise their faith in clandestine churches. All five of his children were baptized in such churches around Amsterdam. His daughter married the broker Sodyn in Amsterdam. She was the source for the Dutch biographer Arnold Houbraken’s biographical sketch of her father. Van de Velde’s career blossomed and he became one of the foremost landscape artists in the Dutch Republic.

He was active also as an etcher. His earliest known works are a set of six etchings executed in 1653. His twenty-odd etchings depict mostly cattle in landscapes, occasionally with herders. These works were highly prized by collectors in his time.

Despite his success as an artist, he was in dire straits throughout his life. His wife had to run a linen business to help make ends meet. When he died his possessions and works were auctioned but the proceeds were insufficient to cover his debts. 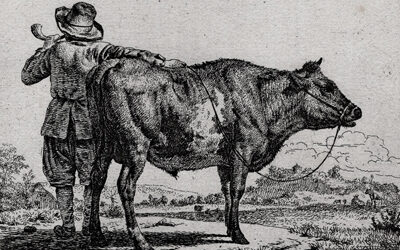